Here are some mosaicked images that have been constructed from IPHAS data so far.

(Please note: The images in this gallery are released into the public domain. If any image or images are redisplayed or reproduced, please accompany the image or images with the following acknowledgment: "Image based on data obtained as part of the INT Photometric Hα Survey of the Northern Galactic Plane: prepared by [name of image author/s as given below], [institutional affiliation of image author/s]") 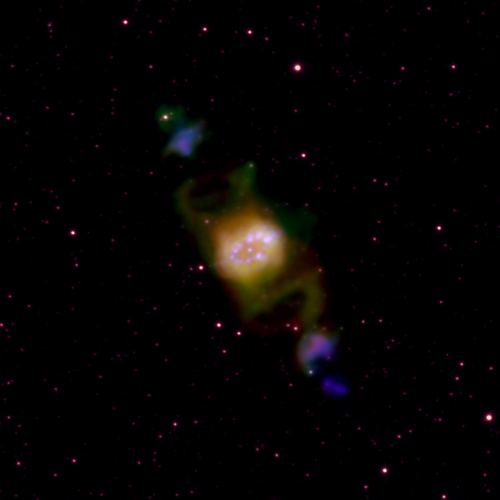 This beautiful nebula is a composite built from follow-up narrow band imaging of this IPHAS discovery. The equatorial ring, broken up into head-tail cometary structures was picked up first in Hα in IPHAS exposures. The more diffuse structure bathing the central equatorial ring is seen in [OIII], while the detached polar knots ('ansae', shown in blue) were detected in [NII]. From ansa to ansa, the aky angle is a few arcminutes. (credits: Nick Wright; the additional narrowband data was collected by Romano Corradi and collaborators) 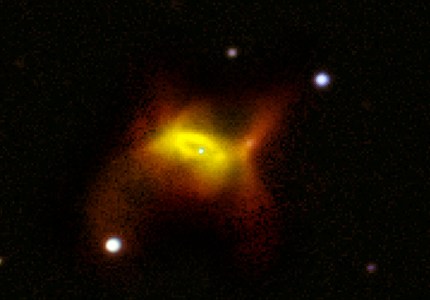 This is another IPHAS discovery - The Prince's Nebula. It was the first planetary nebula noticed in IPHAS data not long after the start of the survey in 2003, and it has become the subject of published paper (Mampaso et al 2006). This is on account of its unusual morphology and its location, toward the outer edge of the disk of the Milky Way. This Hα image shows just the bright waist of a much larger fainter nebula whose main axis lies roughly at right angles to this waist. It is nicknamed "The Prince's Nebula" for it becoming a virtual wedding present to the Prince of Spain, an astronomy enthusiast, on the occasion of his wedding in 2004. 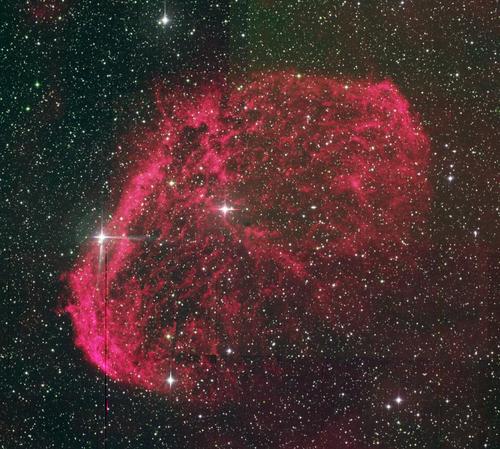 This is NGC 6888, otherwise known as the Crescent Nebula. It is the illuminated ejecta of the WR star, HD192163. This image combines data from all three IPHAS survey passbands (Hα, Sloan r' and i') in a false colour composite. Emission in the Hα narrow band is in red, of course. The orientation is with N to the left and E down, and the image scale is about 20 x 18 square arcminutes (credits: Jonathan Irwin) 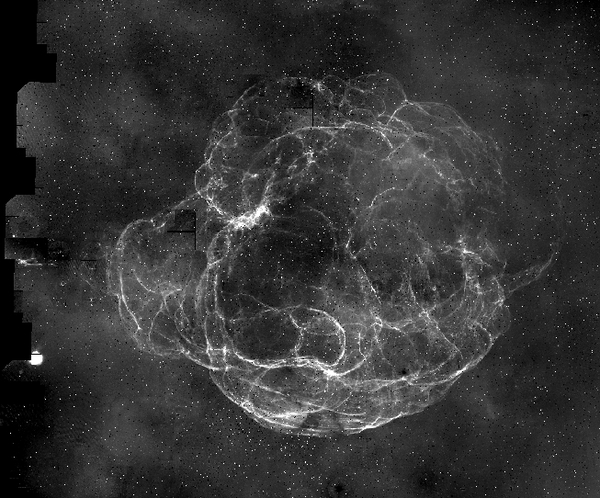 This is a continuum subtracted Hα image of the supernova remnant S147, located on the sky toward the anti-galactic centre. A strength of IPHAS is that it offers the chance to construct images of parts of the Galactic Plane on any scale from arcseconds up to degrees. This is a very large-scale image, built up by mosaicking a large number of overlapping IPHAS fields together: the total imaged area is roughly 5 x 3.5 square degrees. The bright blob to the left of the picture is a more typically compact Galactic nebula. (credits: Albert Zijlstra, and Jonathan Irwin) 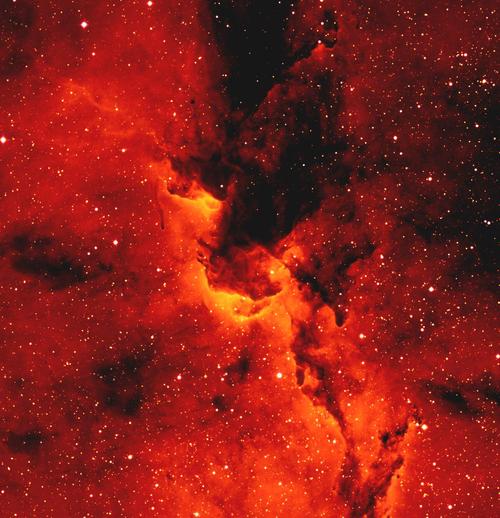 This is a false-colour composite of nebulosity in the vicinity of the HII region, IC 1396B, in Cepheus. The image scale here is roughly 15 x 15 square arcminutes, with N to the left and E down. (credit: Nick Wright) 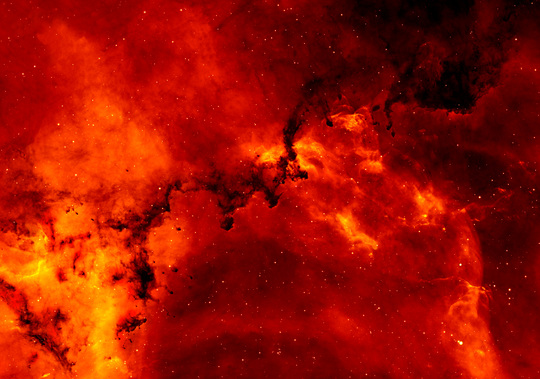 This is an excerpt from Nick Wright's mosaic of the entire Rosette Nebula, built as the IC 1396B image. The centre of this HII region, where the exciting star cluster (NGC 2244) is located, lies at the middle-bottom of this image (N is to the left, and E down). The longer dimension in this image is approximately 30 arcminutes. (credit: Nick Wright)

Some more image mosaics derived from IPHAS observations can be found on Albert Zijlstra's web page, and also on Nick Wright's IPHAS gallery.