The uniform wide area coverage of the Galactic Plane provided by IPHAS is perfect for feeding thousands of potential targets, of different types, to new-generation wide field spectrographs in construction. IPHAS will be exploited in this way for WEAVE, being built for the William Herschel Telescope and expected to be in service from early 2019.

219 million have been detected at a typical seeing of 1.1 arcsec and cataloged in DR2. The important object classes that IPHAS data readily distinguish include: 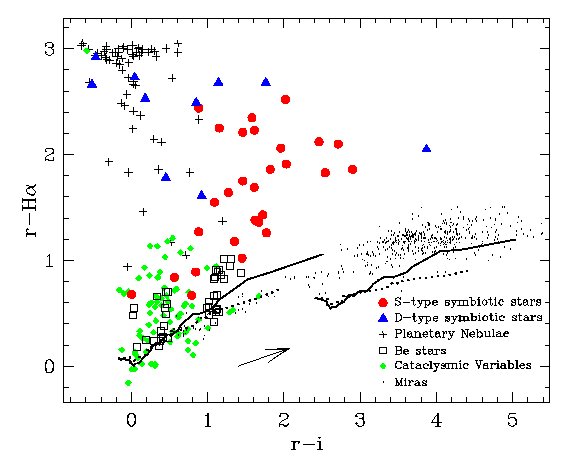 This figure is a schematic representation of the (r-Hα, r-i) colour-colour plane that IPHAS data define. The points plotted are the IPHAS colours of already-known objects falling into the object classes specified in the key. The main stellar locus, occupied by the great majority of normal stars, is located in between the synthetic tracks drawn in black, corresponding to unreddened (left) and reddened (E(B-V) = 4, right) main sequences. The dotted tracks crossing this area are the unreddened and E(B-V)=4 giant-star sequences.

The figure is from Corradi et al 2008. A discussion of the properties of the colour-colour plane, IPHAS survey methodology and sample data, was presented in Drew et al 2005. (See also the publications page).

A feature of the IPHAS colour-colour plane that has great utility is the nearly orthogonal dependencies of increasing reddening and intrinsic stellar colour. For stars located within the main stellar locus, this bestows a one-to-one correspondence between (r'-Hα,r'-i') co-ordinates and (intrinsic colour, interstellar reddening). In turn this implies that the main stellar locus can be analysed very effectively for constraints on the rise in interstellar extinction with distance into the Galactic disk. A recent demonstration of this is provided by the comprehensive mapping of the northern Galactic Plane by Sale et al (2014). Data from this study may be accessed via our data pages.

IPHAS has proved to be a valuable resource for identifying nova progenitor objects. Nova Vul 2007, or V458 Vul (see Wesson et al 2008) was a particularly striking example. Most unusually, the progenitor object of V458 Vul was seen in IPHAS data to have an association with what appears to be a planetary nebula. Other examples have been reported via "Astronomers Telegrams" (see e.g. ATEL No. 795. and ATEL No. 1031.). There are more examples on the publications page.